'Twas the Night Before Christmas...

‘Twas the night before Christmas, and all through the house, every creature was stirring, especially Allison!

When I got home from work at the zoo on Christmas Eve 2014, Allison’s contractions were consistently about 20 minutes apart but not painful at this point. She told me they had begun at around 1:00 p.m., and had been getting slightly worse all day. This was exciting news for us, but we knew it was just the beginning. Like every year, we had plans to go to the Christmas Eve service at church, New Life, and we thought we were safe to go this year as well. Church started at 6, so naturally we got there 45 minutes early to save seats for ourselves and those with us. All was well, we were tracking contractions on an app we downloaded to Allison’s phone. 10 minutes. 8 minutes. 5 minutes apart, then kind of back up and down, and up and down.  The church service was beautiful as always, and about half way through Allison showed me her phone with consistent contractions at 5 minutes apart lasting for a minute. They still were not really painful, so we weren't completely worried.

Getting caught up in the emotion of all that was happening and the celebration of Christ’s birth, we had to step out of the service a bit early and have some alone time. At this point we decided to just call over to the hospital and let them know we would probably be making an appearance at some point over the evening. They assured us that we were not super close yet, and to just continue doing what we were doing.

Feeling a little better about everything at this point, we were able to relax and settle down. We waited for the service to get done, and headed over to my parent’s house for some Christmas Eve supper and games. We were blessed with a great dinner and fellowship with my parents and some friends from my mother’s office, Lee and Judy Guthrie. Having kids of their own, Judy gave us some great advice, “they are really hard to kill.” At first glance, this is a super terrible thing to say. But stop and think about it for a moment. People have been having kids for thousands of years, and the earth’s population continues to grow. People that have no right having children somehow manage to pull it off and have healthy happy kids. Surely, we can handle this. Made us feel better at least.

At about 10:00 p.m. Allison’s contractions were super sporadic, at one point even being 27 minutes apart. We headed home from the parent’s house not really sure what to think or how to feel. Things appeared to be slowing down again, false alarm?

By the time we had gotten home (about 15 minute drive), things were already picking back up again. Allison took a bath, I have her a little foot massage, and we tried to get some sleep. At 2:00 a.m. on Christmas Day, Allison woke me up having super strong and painful contractions that were consistently 5 minutes apart again. We had already planned on trying to labor home as much as possible, so I put her back in the bath tub and we tried to struggle through it at home as much as possible.

At 4:00 a.m., she had had enough and we made our way to the hospital. Before admitting you, they bring you to the triage unit in the baby center to check your progress. We were fully expecting to hear some big numbers; 6, 7, 8 cm at least. Nope. We were at 3.5 cm (cue the sad music). The nurse was pretty dead set on sending us home, but let us walk for an hour in the hallways of the baby center to see if that moved things along. This was not a stroll in the park. Allison was in a huge amount of pain! Contractions were coming very quickly, 4 minutes, 3 minutes, 4 minutes, 2 minutes.  Each time Allison had to either find a chair to sit in, or grab tightly to the walking rails until the contraction passed. With so much pain and tears, I knew we were getting close.

After the hour was up, we went back to triage to get checked again. I knew we were getting close, so I was again ready to hear some big numbers. After all that pain and struggle, she had to be at about 8 cm, I was sure of it. Nope. A whopping 4 cm. The nurse’s goal was 5 cm, so she sent us home at 6:00 a.m.

God made woman in a very special way, to endure a ridiculous amount of pain and then forget about it after it is all done. Otherwise no woman would have two children. God did not include men in on the back half of this deal, I will never forget the next few hours of this story.

By 7:30 a.m., I was considering finding my ear plugs because Allison was screaming at me with enough intensity to make an ex-marine, black belt, coal mining, cigar smoking, body building, skydiver; rethink his life. (I am none of these things, I was not prepared). We tried taking baths, we tried massages, and we tried sitting, walking, standing, laying, dancing, and crying. The crying came pretty naturally.

8:30 a.m. (still Christmas) rolls around, and I can’t even get her to move her big toe without having a contraction. The nurse at the hospital told us to wait until she could not talk or walk. She was still talking at this point (really loudly), but I thought we were probably good to go in again. I figured when they saw how much pain she was in they at least wouldn’t send us home again. My view on how fast we were to progress was highly skewed because we hadn’t barely seen any progress after walking in the hospital.

We started to slowly make our way to the hospital, but first we had to make it to the car. Our bedroom is upstairs, and the car is obviously not. She had a contraction as she sat up in bed, then when she stood up, then one on the stairs, getting her shoes on, getting in the car, in the driveway, halfway there (we live 5 minutes from the hospital), getting out of the car, halfway to the door, then in the hospital. A nice man came with a wheel chair (we later found out he was the valet driver, just saw we obviously needed help). She had another contraction in the elevator, and then at the sign in desk (makes it hard to sign in). The nurse saw that she was in some pretty obvious pain, so rushed her back to check her progress.

I was expecting to hear maybe 6 cm at most. Nope, 9 cm! Allison’s first words were, “can I still get an epidural?” The nurse then called in another nurse, and got on the phone with the anesthesiologist and the doctor, and they rolled Allison away on a bed. I had about 9,000 bags and was trying to chase them down the hallway. This was all happening very fast. We got to the delivery room and I set down all the bags/coats/camera, only to find that the computer in that room wasn't working and we had to move again! So they rolled her away again as I frantically strapped everything on and chased them down the hallway again.

We were finally there! After 9 months of waiting and anticipating, this was it. And even on her due date. Punctual like her mother.

The anesthesiologist was with another patient and would be 20 minutes out, they weren't sure she would even last that long. There were about a hundred people that rushed in and out of that room, and everybody knew exactly what they were doing. In a strange way it was actually not that stressful. They all just came in not saying anything, got the things set up that they had to, and left until they got called back.  Pretty impressive actually.

The anesthesiologist finally showed up with the epidural, or “happy juice” as I call it. He was a super nice guy, and very good at his job. She did not feel the needle poke at all, and within 10 minutes she was feeling like a million bucks. She could feel that she was having contractions, but they did not hurt. Exactly what we wanted.

The next four hours were super nice. The epidural slowed down the process, which we knew would probably happen. It was actually a blessing because it gave us time together with no pain to collect our thoughts and be together as a family before what came next. We talked, we watched “The Devil Wears Prada,” and caught most of “A Christmas Story,” which plays 24 hours on Christmas every year. The nurse was coming in about every 20 minutes to check on Allison’s progress.

At about 1:30 in the afternoon the nurse called in the doctor because it was time to push. By this point, Allison had zero feeling on her left side below her belly button, but was regaining feeling on the right side. We had a little button to push to get more meds, but it wasn’t helping the right side. Even though she was in pain, it was actually kind of a blessing because she could feel how to push better.

We will skip over some of this part.

At 3:24 p.m. on Christmas Day 2014, Finley Noel Nelson came into the world. She was beautiful from the very beginning. We had about an hour to ourselves immediately, and she fed from mom within 15 minutes. A nice gal came in after an hour to give Finley her first bath there in the room with us, and we got to watch everything. The hospital is set up beautifully so that the baby never leaves the room with us. The whole time we were there she never left our side.

After two hours we moved to a room in the “mother/baby” wing, and stayed there for two nights. We probably would have only had to stay for one, but she had just a little jaundice so they wanted to re-check her in the morning. The pediatrician was apparently very busy, because the morning turned into the afternoon and we didn’t see her until 3:30 p.m. We got the green light to leave, and got out of the hospital and home by 5:30 p.m.

Being at home together as a family over the last few days has been fantastic. We have had a few more appointments to get her weighed and tested for jaundice. Her weight is going up, and her jaundice is going down. Life is good. We are a family. And we are definitely feeling blessings from the Lord. 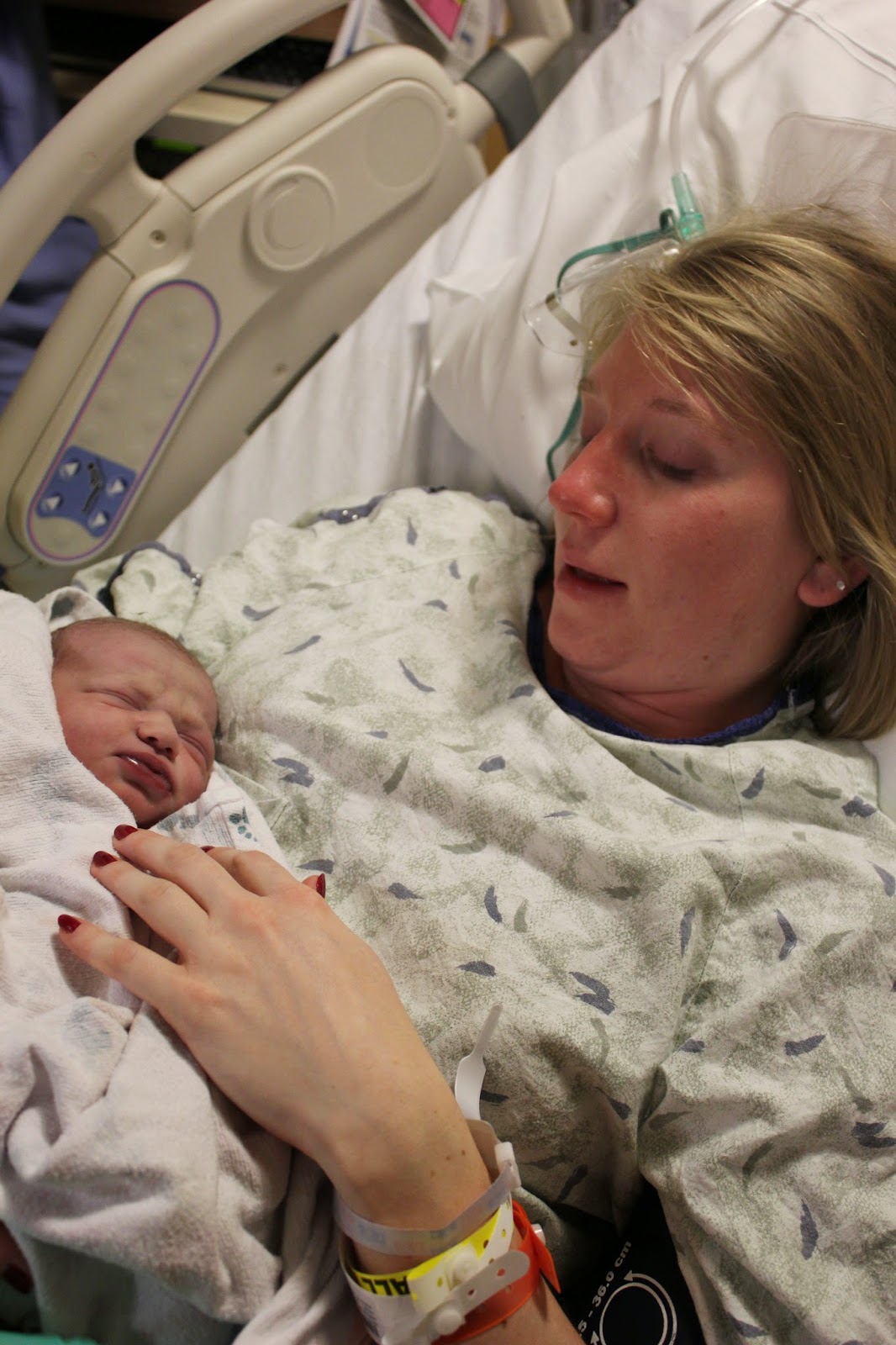 The first picture of Finley, only moments after she was born. 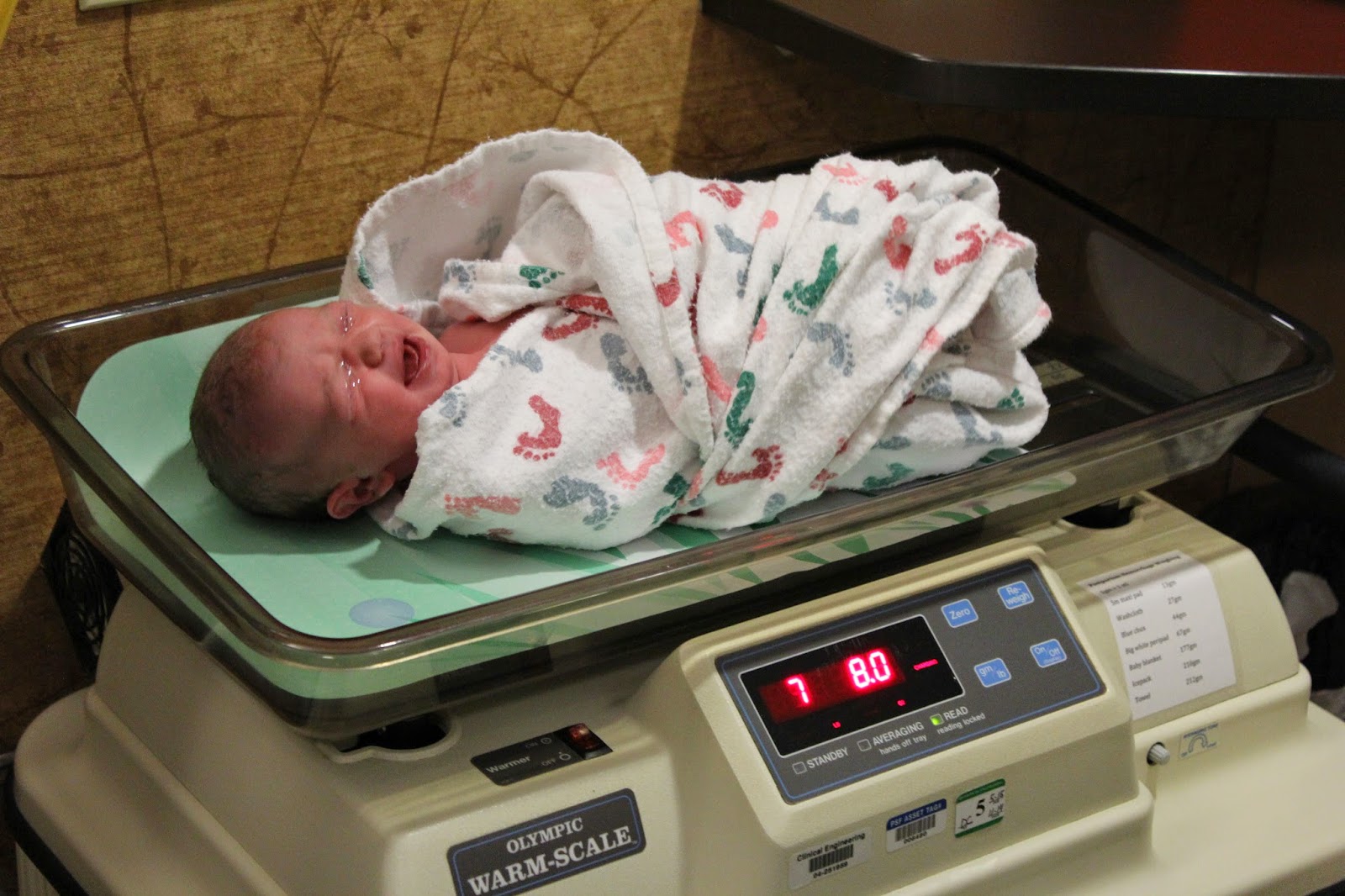 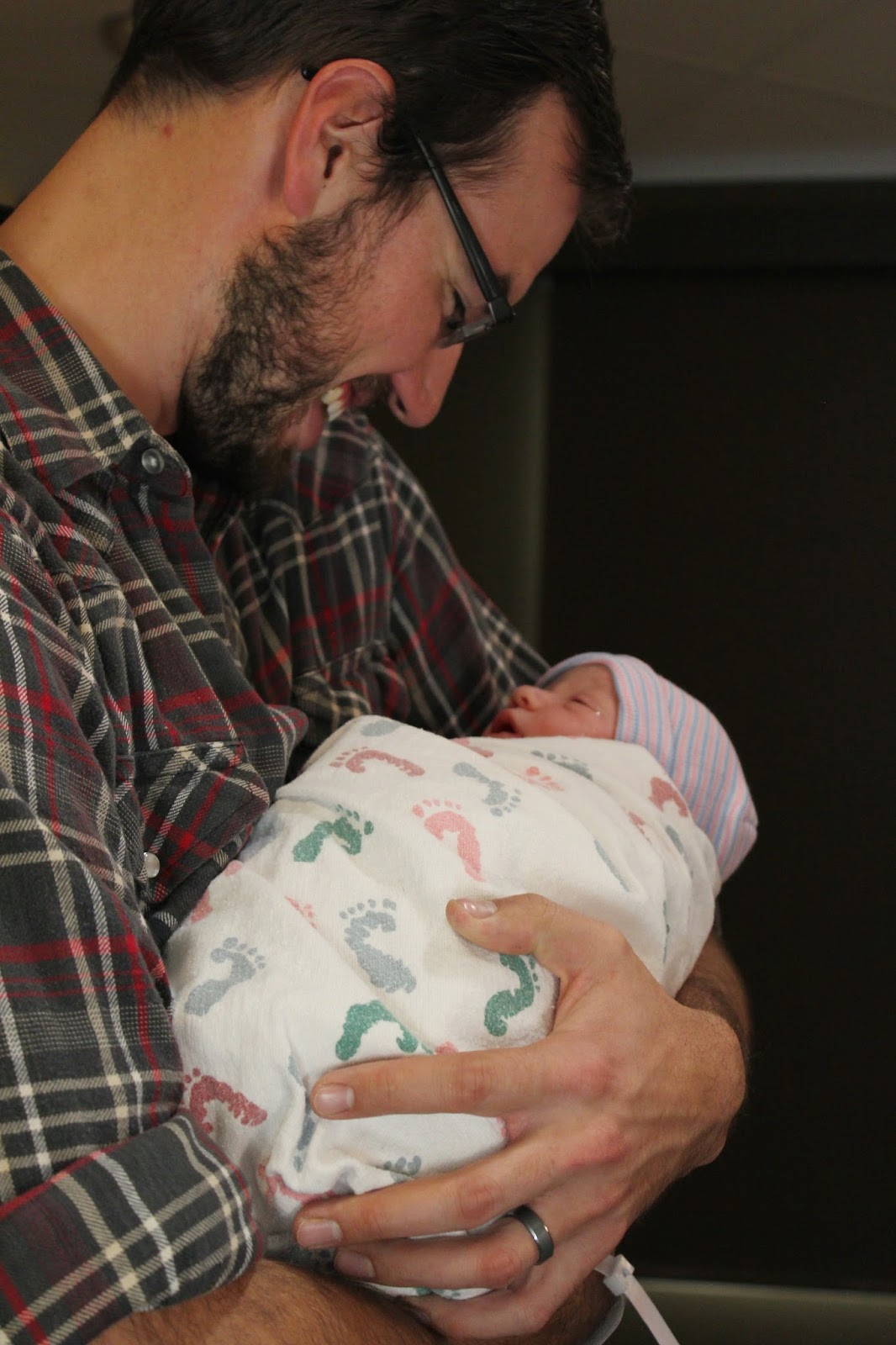 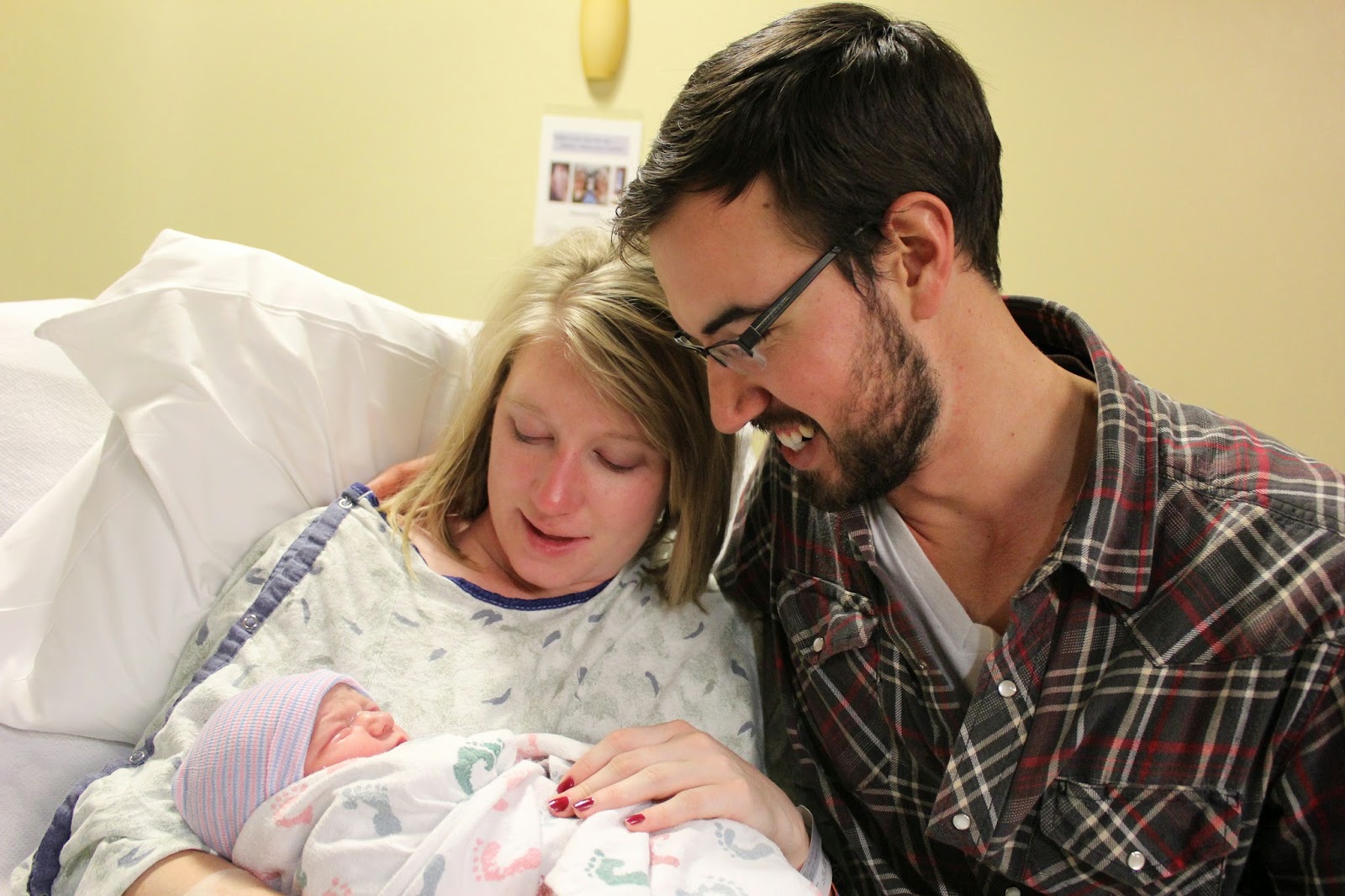 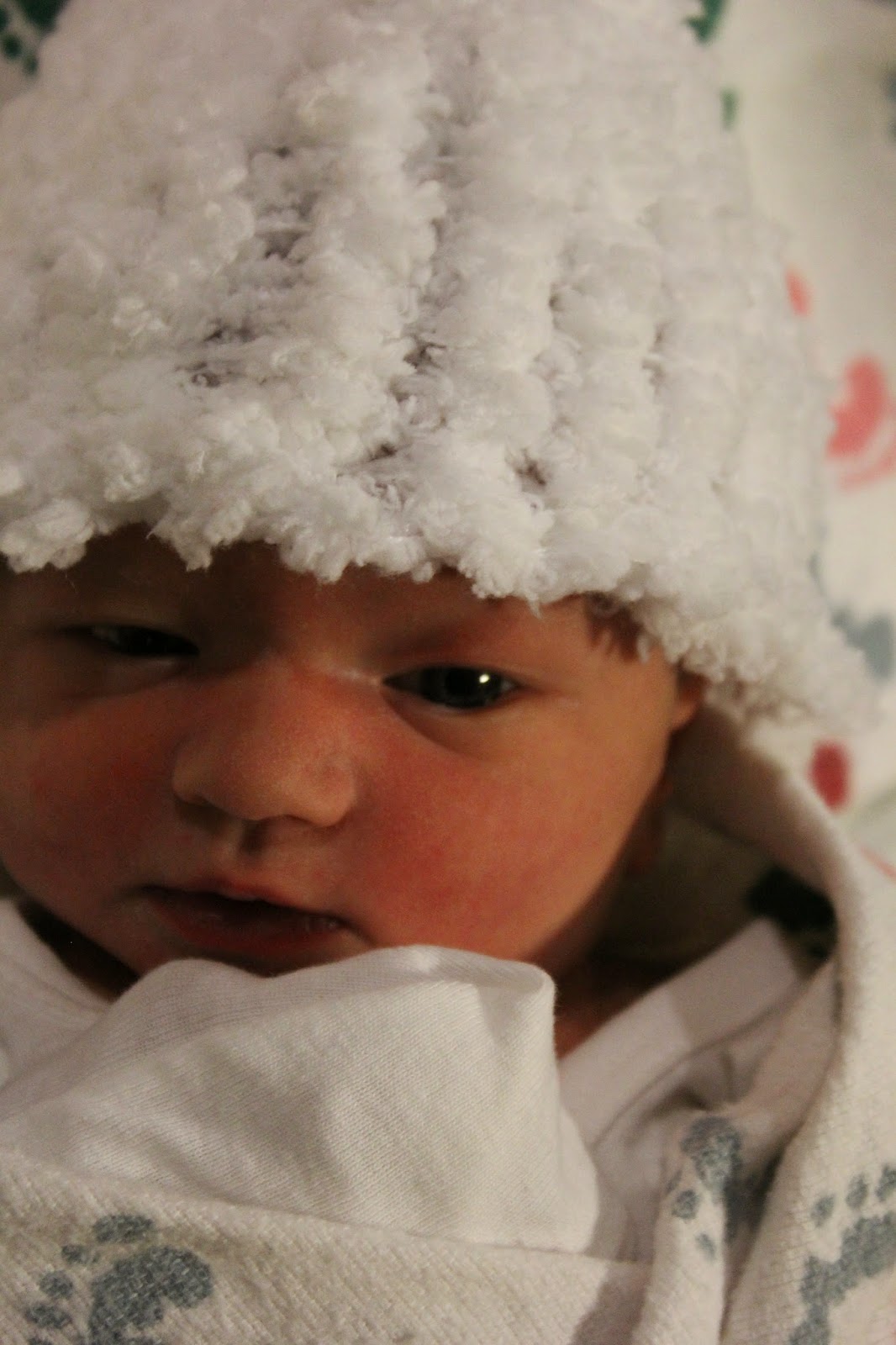 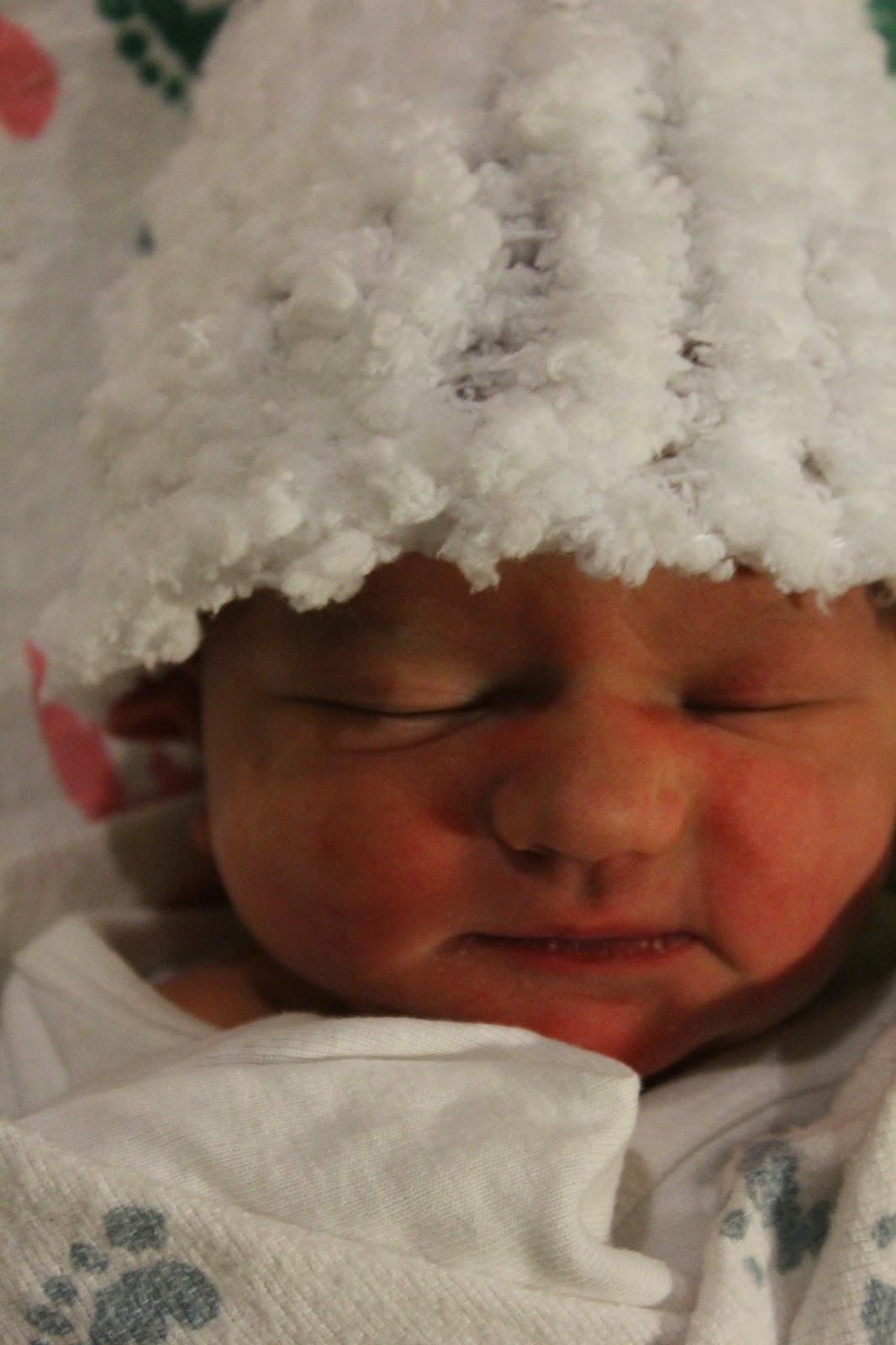 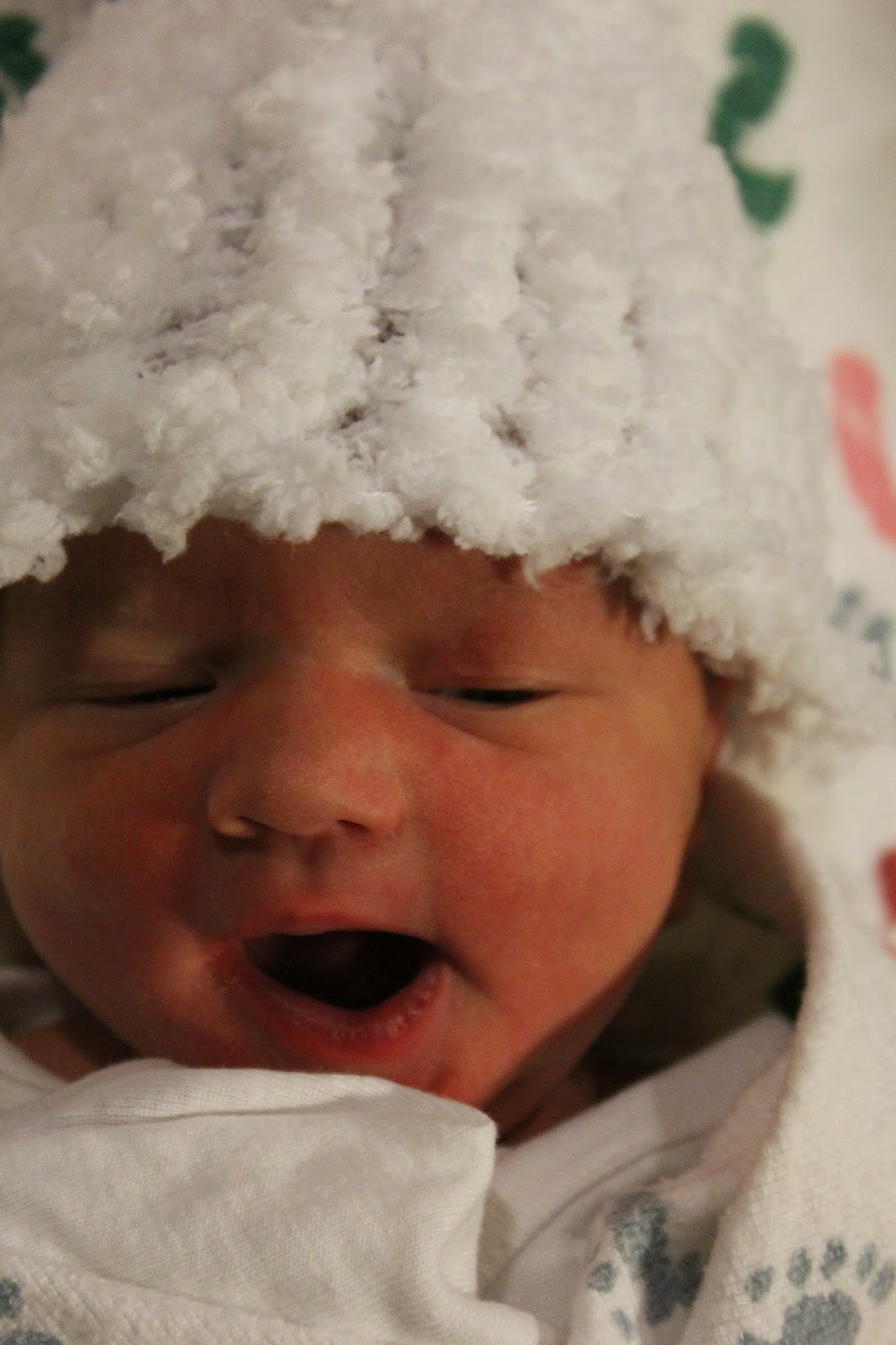 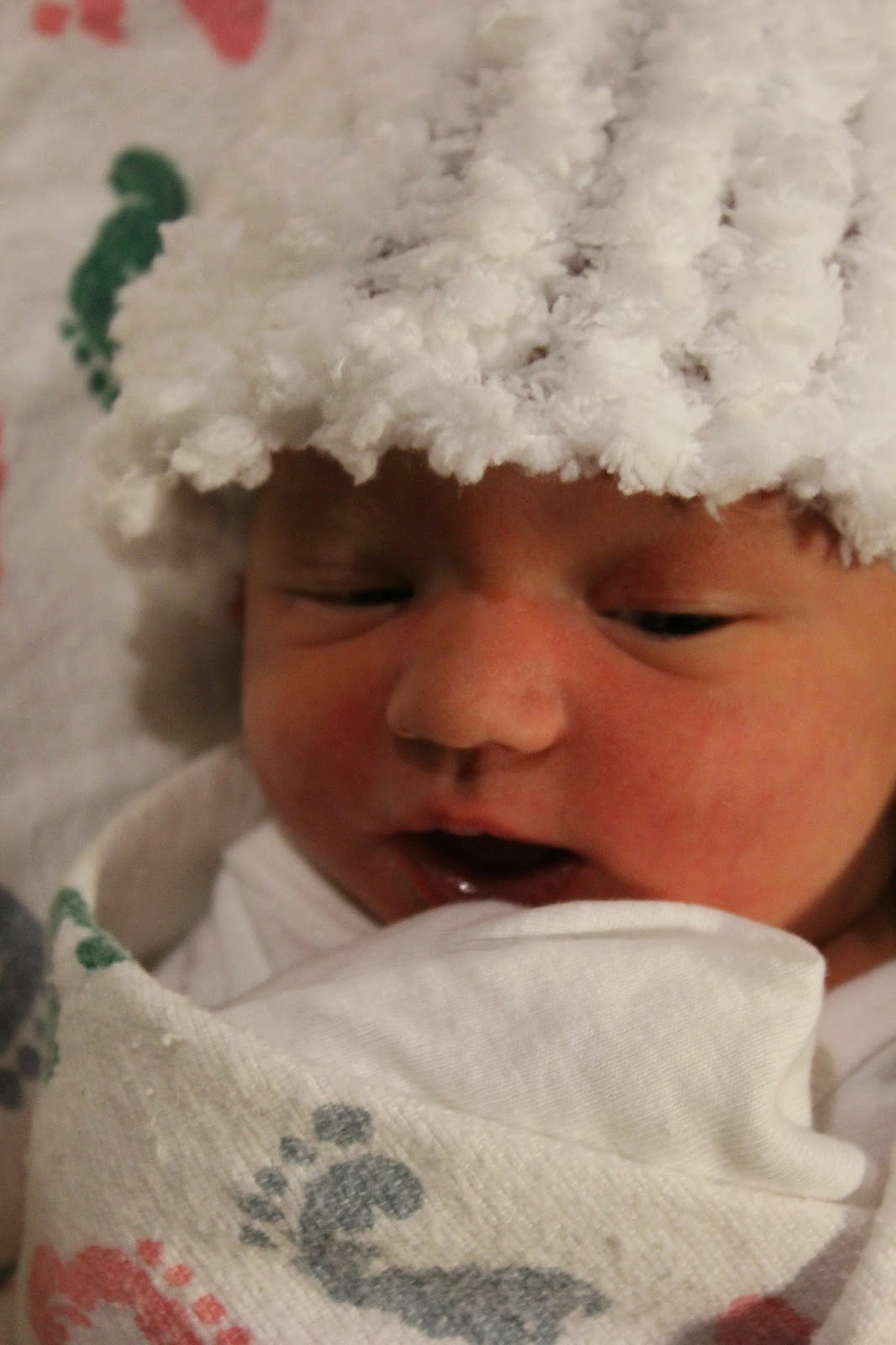 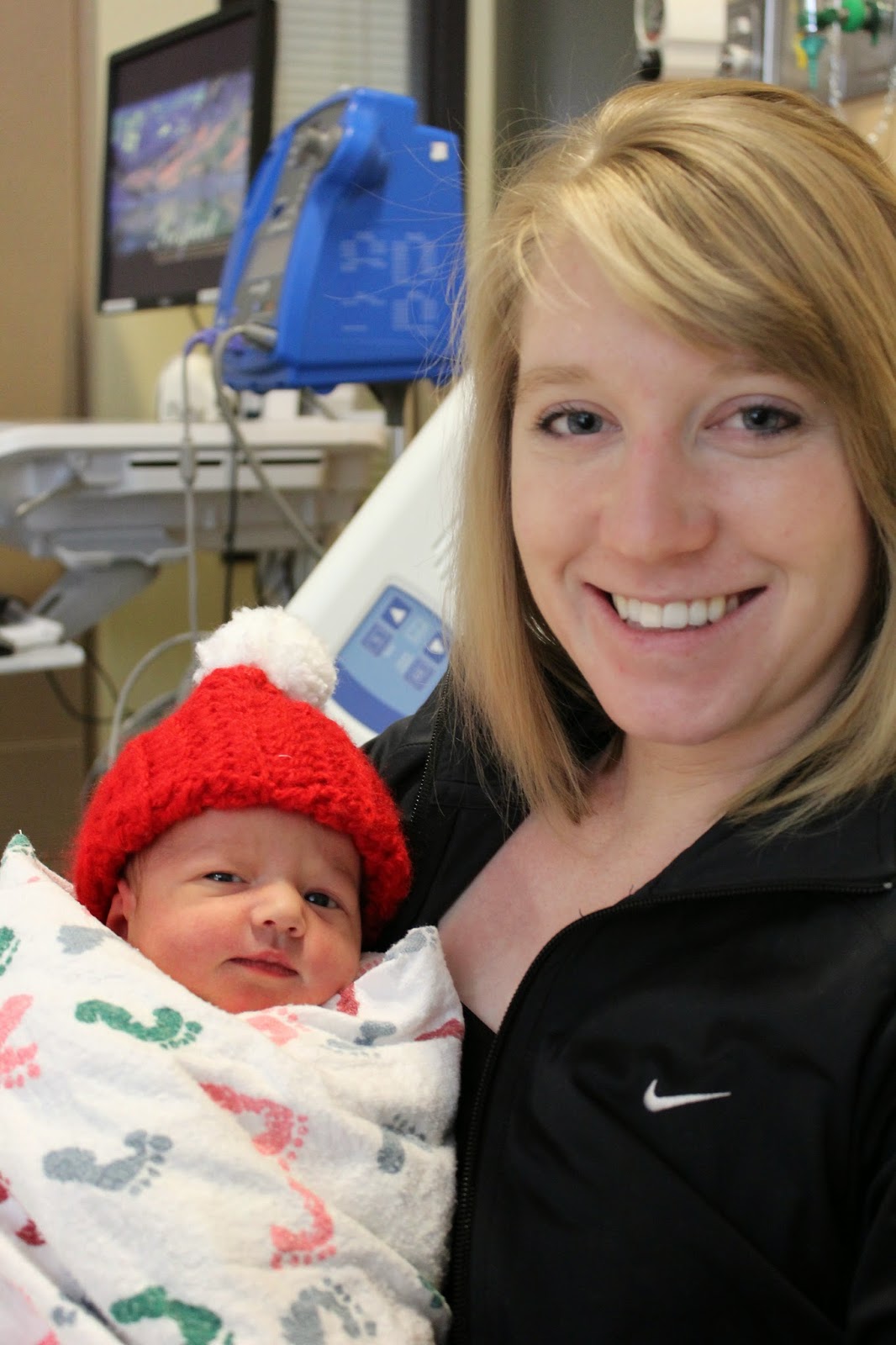 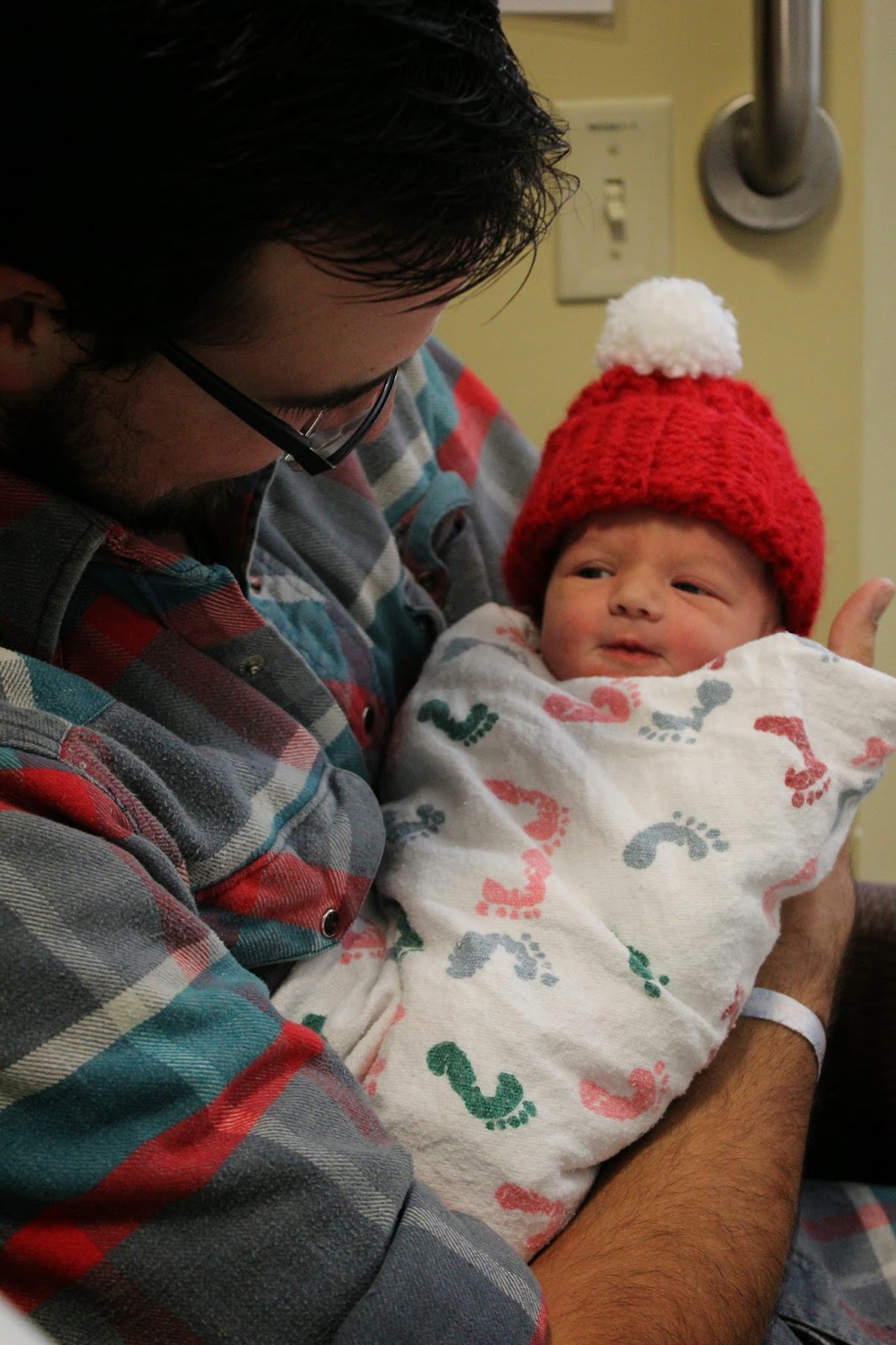 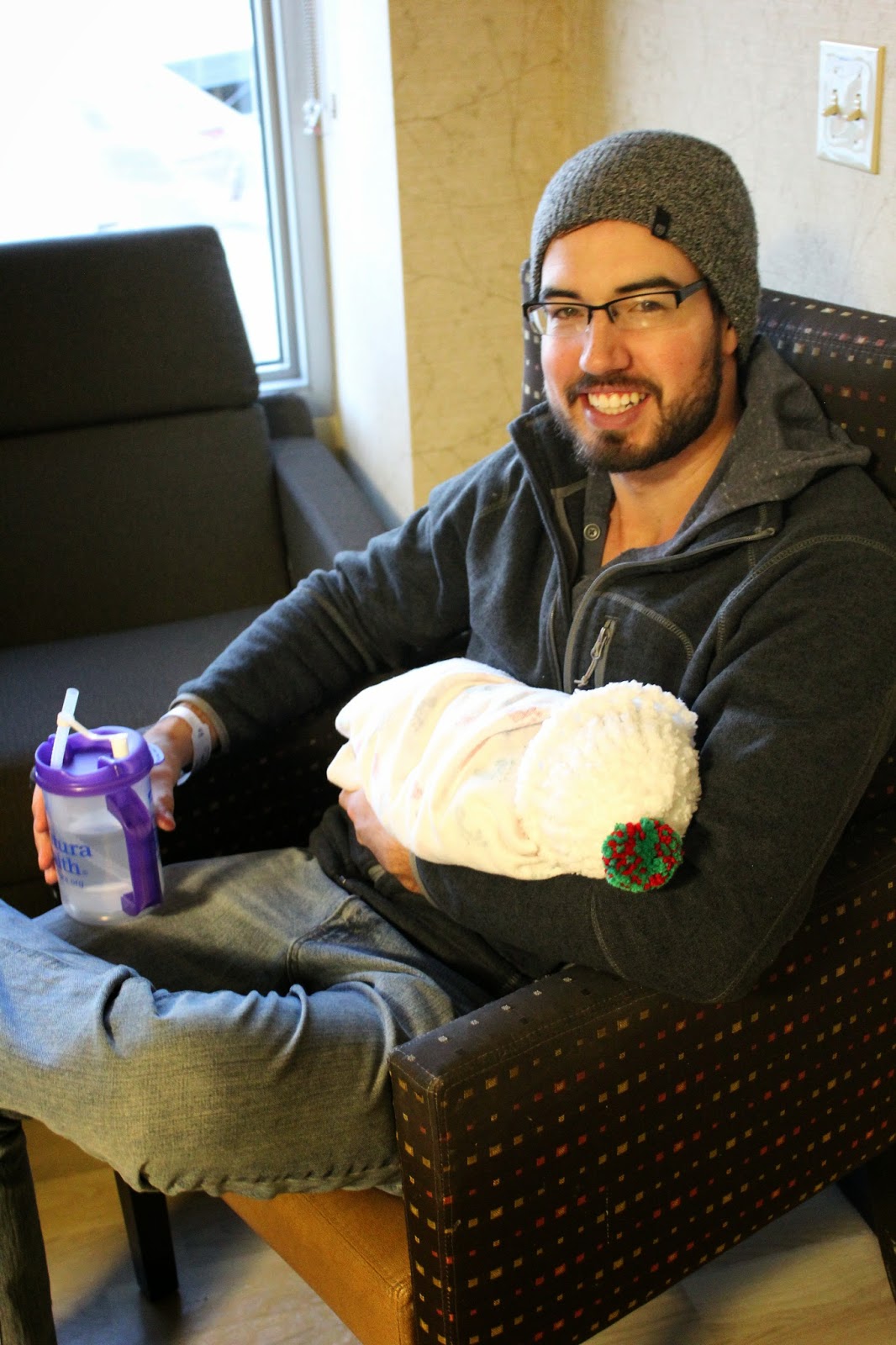 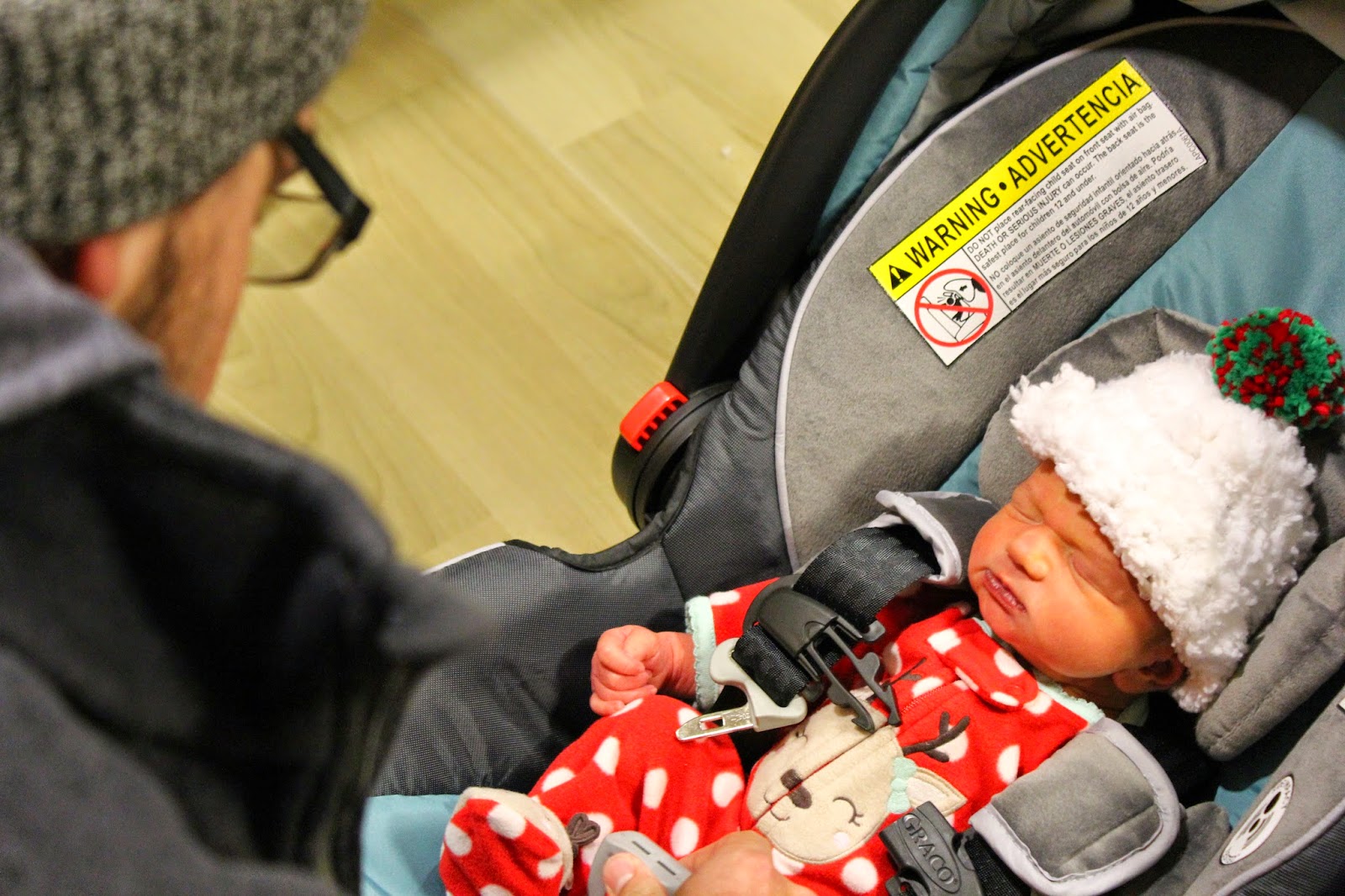 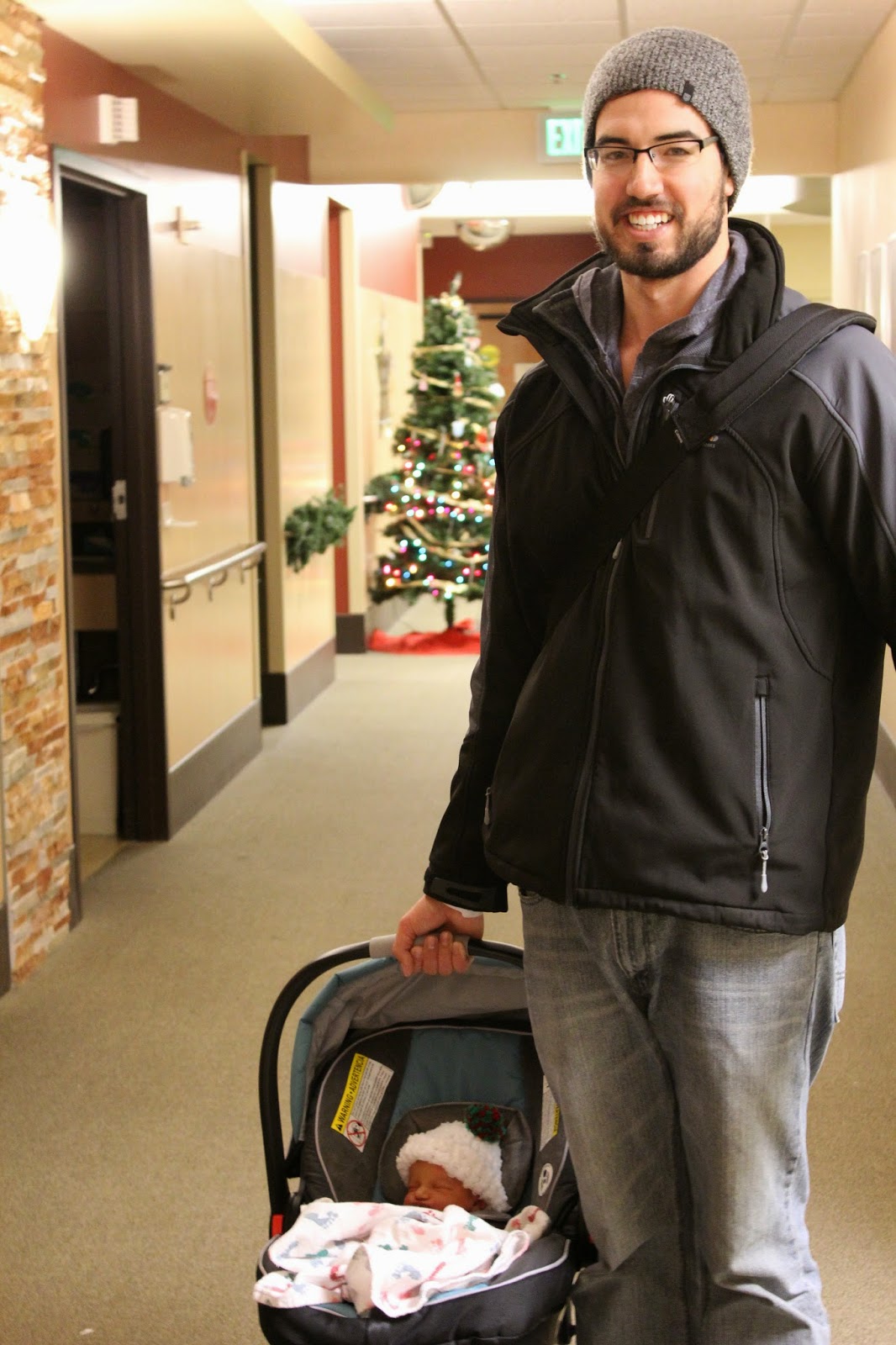 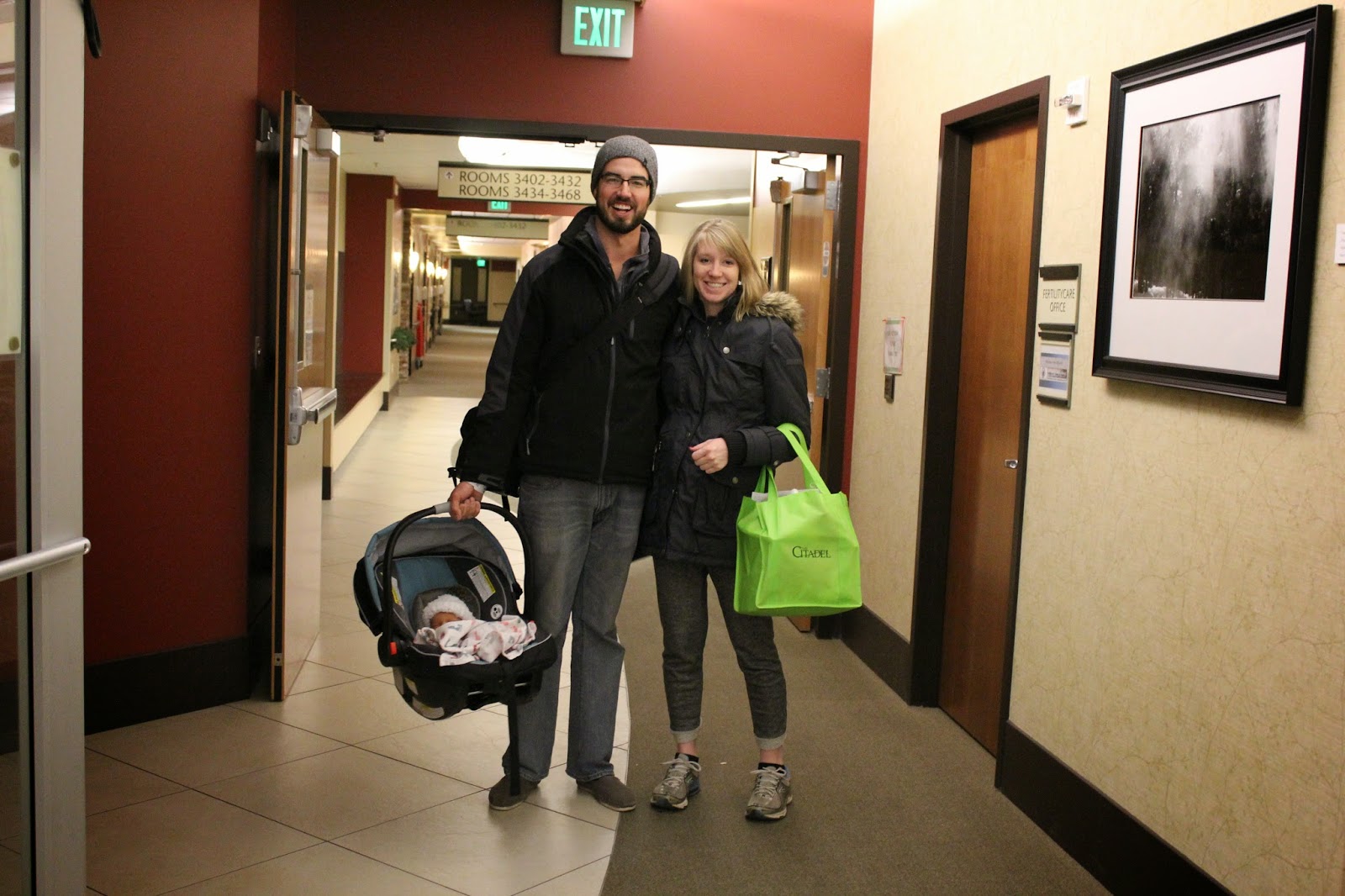 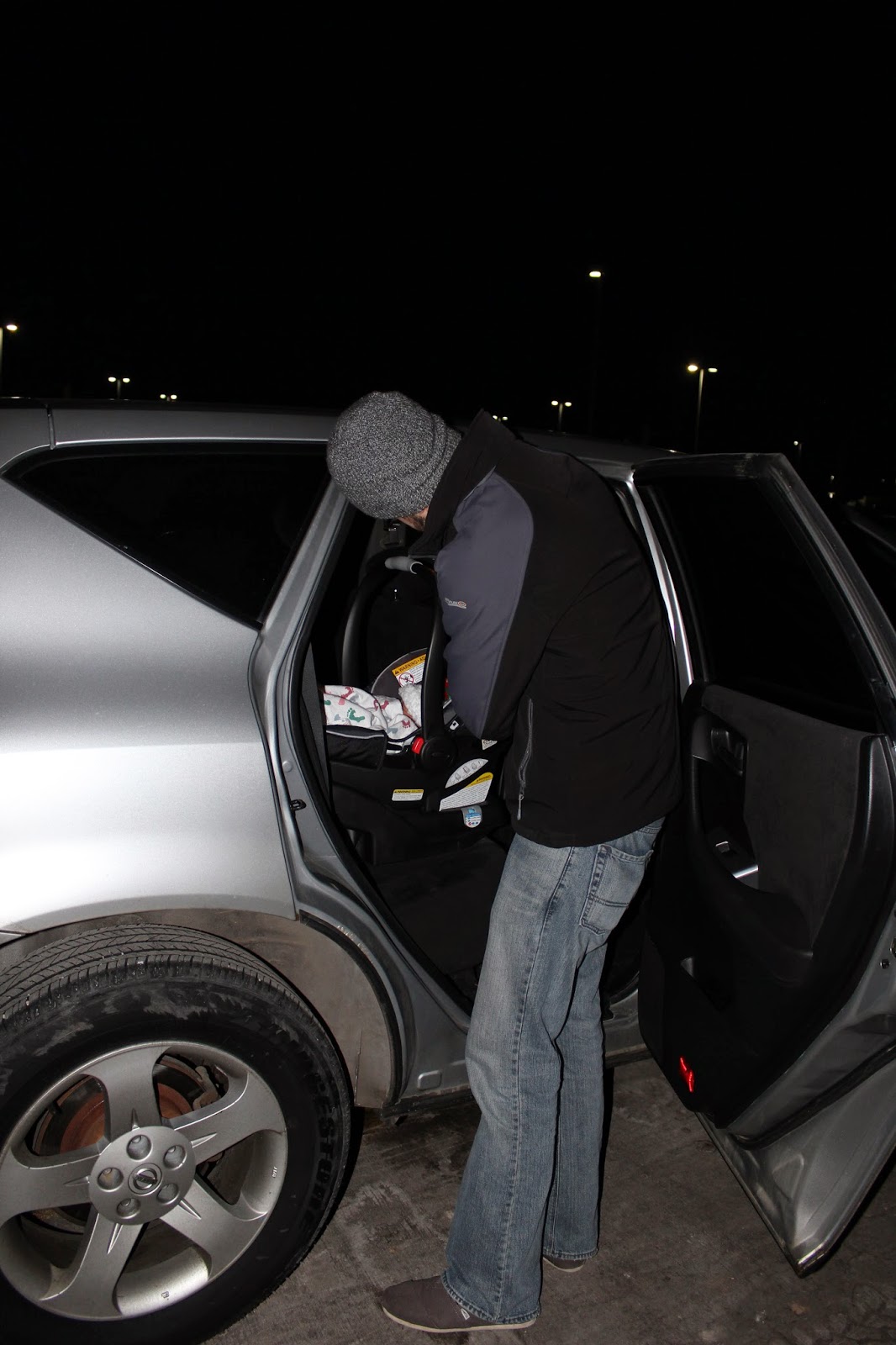 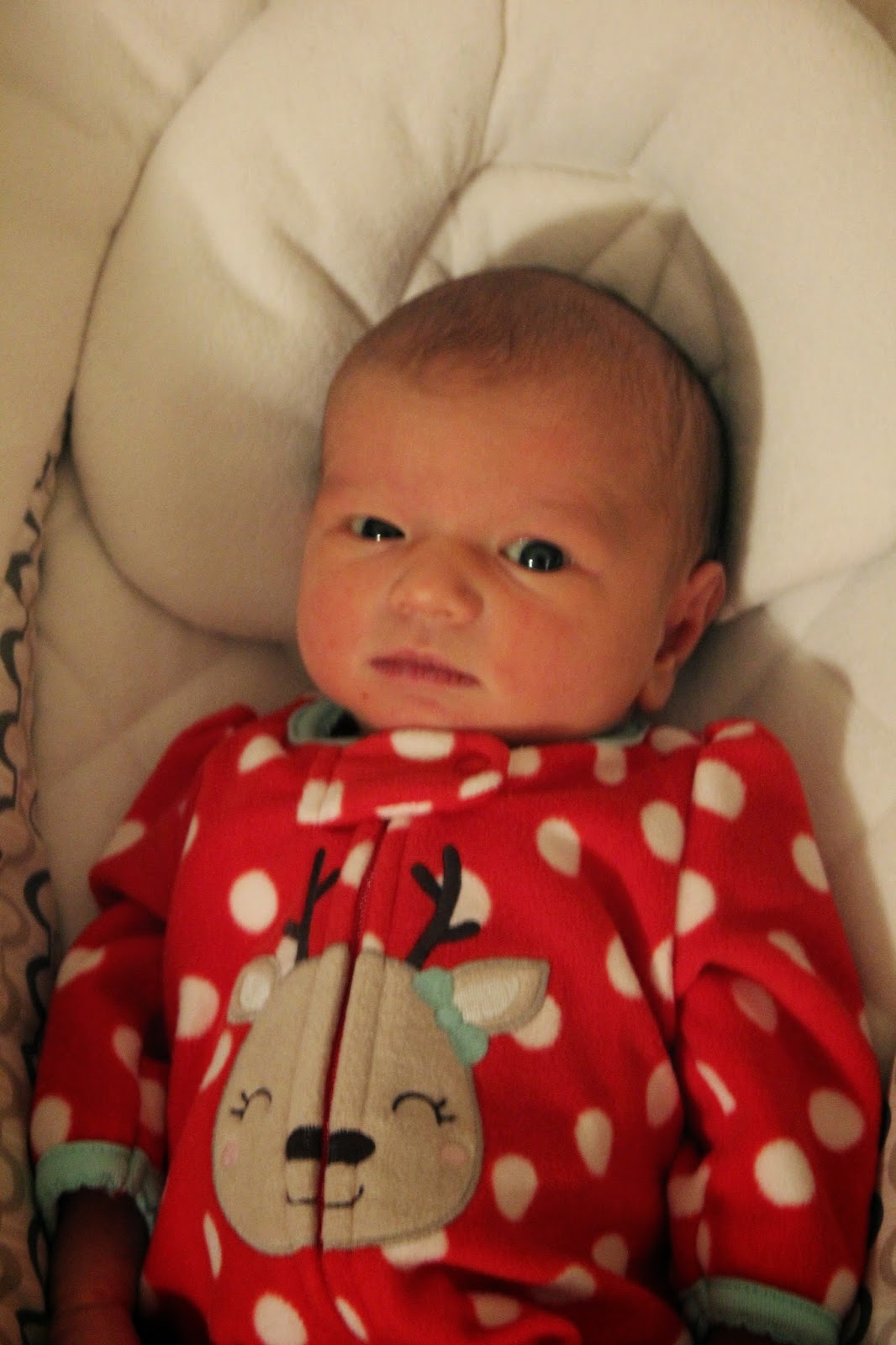 Posted by Anthony and Allison at 7:09 PM